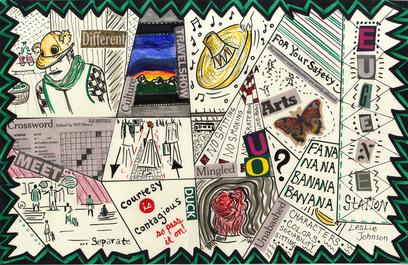 Curious Terrain developed a series of activities for the 2010 incoming class of undergraduates in University of Oregon’s Landscape Architecture program, using an early prototype of the Explorer's Deck. This exercise challenged students to merge disparate experiential themes into a single, coherent and compelling image of a place.

Eugene Station is the public transit hub of downtown Eugene, Oregon. Roughly half of a city block, the site is quickly traversed on foot. One of the most active public spaces in the city, the site attracts a broad spectrum of the population that students were unlikely to encounter on campus or in their residential neighborhoods.

Students deliberately selected four Discover cards that intrigued them. To ensure that each of the cards was used by at least one person, a sign up list was passed around the table, and students were asked to distribute their choices as evenly as possible.

At Eugene Station, the students did the All Hands on Deck activity, sketching the place in the context of their four chosen cards. Back in the studio, they were asked to review their sketchbooks and imagine that the drawings represented the colorful jewels inside of a kaleidoscope.Their job was to "rotate the kaleidoscope" and examine the images that result. The final assignment was an 11 by 17 inch collage that merged their field discoveries into an expressive and comprehensive vision of the place. They were encouraged to experiment with techniques including cutting and pasting, tracing, re-drawing, photocopying, layering and writing.

Reviewing the students’ “kaleidoscopic mementos” was exhilarating. The collages are not merely an agglomeration of repurposed sketches, but something larger than the sum of their parts. They are intriguing to look at - landscape-inspired works of art.

Having all students explore the same place led to interesting revelations during the pin-up of this exercise. I asked students to respond to each other’s work by discussing what they believed each memento conveyed about Eugene Station. I then asked the creator of the piece to confirm or challenge these initial interpretations by explaining their experience of the site, as well as the techniques they used to capture that experience.

Curious Terrain has gathered most of the students' final collages on this page. Click on the images to view their "kaleidoscopic mementos."

Want to try this activity? Download the print-friendly Activity Sheet.

Look at a place through a series of prisms. Draw and merge what you see. 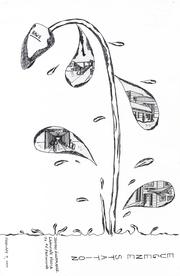