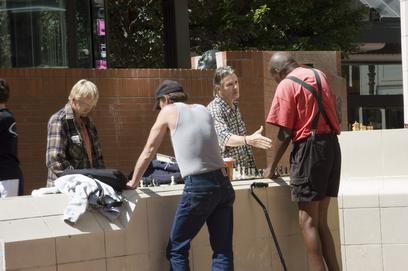 I was testing an early prototype of the Explorer's Deck, and simply wanted to see what the cards could do for me, whether they could help me understand and appreciate an outdoor public place.

I chose a place that is well known, easily accessible and guaranteed to be filled with people. Pioneer Courthouse Square is highly regarded as a successful urban open space, and I wanted to explore why that is.

Luck and chance are key elements of card games, so I was curious to see whether a random draw of cards would afford a productive site visit. Separating out the Record and Discover cards into two piles, I blindly drew one from each pile. My Record card was Glossary. My Discover card was Lingering - an early concept that later was folded into the Activities and Sitting cards.

I found a spot with an excellent vantage point of the square and stayed there for about an hour, writing detailed notes. Since my goal was to create a glossary, I focused on coming up with memorable terms to describe what I was seeing, and writing descriptions for each term.

Pioneer Courthouse Square is a highly social environment, so I naturally found myself having conversations with people. Rather than being a distraction, the chatting led to additional insights about the place. It quickly became clear that photographs would be a fine complement to my glossary terms. So after observing and writing and chatting for awhile, I spent roughly half an hour taking photographs to illustrate my written observations.

Back in the studio, it took several hours to put together my final glossary in digital form. Wanting something compact and easily digestible, I constrained myself to three 8.5 x 11 inch pages. I refined my field notes into more polished glossary terms and definitions. I reviewed my photographs, chose the ones that were most illustrative of my glossary themes, and made basic quality edits to the images in Photoshop. Finally, I composed the photos and images into a final document, using OmniGraffle.

I was already familiar with Pioneer Courthouse Square, so there were few surprises. Even so, I learned to appreciate elements that I had not previously considered: The many seating arrangements that afford varying levels of sociability; and how the varied forms of the place lend themselves to varied activities. In addition to the predictable office workers and tourists, I found chess players, parents with young children, senior citizens and groups of teenagers. I was impressed by the diversity of visitors, and by the ability of the Square to seamlessly accommodate people in wheelchairs, scooters and strollers.

I already knew that the Umbrella Man statue is a Portland icon, but I was surprised and delighted to see how people of all ages interacted with the bronze fellow – staring at him, rubbing him, swinging from his uplifted arm and playfully punching him in the gut. Finally, I became aware that the MAX trains passing by at regular intervals were a clarion reminder of an entire city and region beyond downtown, with people zooming in from nearby neighborhoods and far-flung edges of the metropolitan area.

The random drawing of cards was fun – not knowing in advance what themes I was going to focus on, or what recording method I was going to use. Creating a glossary challenged me to look at a familiar place in a more systematic way, and to come up with succinct and powerful descriptions that will be understood by someone who has never been there. The resulting product is something I can easily share with others. It would be interesting to do this activity in teams, and compare results.

I am glad I waited to take photographs until after I was finished observing and writing. If I had begun by taking photographs, I would have gotten distracted trying to capture anything and everything, and the photographs would not have been nearly as precise and illustrative as they turned out to be.

A Guide to Portland's Living Room

What is the play, and who are the players in the Pioneer Courthouse Square theater? 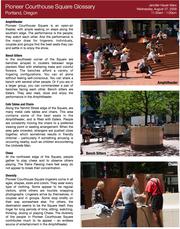 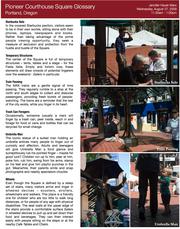