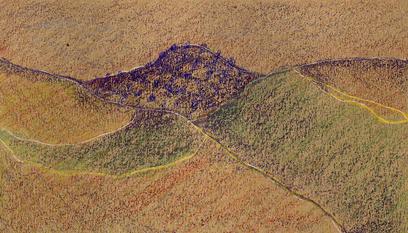 I have spent most of my life in urban and suburban environments, and was curious to try out the Explorer's Deck in a small rural town.

Dufur is a farming community east of the Cascades, with a population of roughly 600 people. Originally called “Fifteenmile Crossing” after the creek that runs through it, the town was eventually renamed after the French DuFour family who settled in the area in 1872. The farmland around Dufur is planted primarily in wheat fields and fruit orchards. (Source: The Oregon Encyclopedia.)

I wandered around town, sketching in response to three Discover cards: Missing, Out of Place and Treasure. I chose those cards because I wanted to capture my immediate perceptions of a completely unfamiliar environment. In less than an hour on foot, I covered a large portion of the town. My sketches were quick and rough, because I didn’t want to draw unnecessary attention to myself by lingering in any one spot.

It began to rain, but I wasn't ready to stop drawing. So back at the hotel, while the walk was still fresh in my mind, I played a memory game. I shuffled my Discover cards and randomly drew one from the pile. Setting a timer for five minutes, I drew in response to that card, based on my memories of the walk I had just taken. I repeated this game five times.

Back in Portland the following day, I realized that I had failed to record something essential – the agricultural landscape that is the lifeblood of Dufur and its most striking visual element. This was not the gentle, rolling green farmland of the Willamette valley. This was a dramatic, topsy-turvy roller coaster, burnished bronze with slashes of green in the areas too steep to plow. Patches of last year’s mowed wheat fields alternated with patches of overturned soil and rows of fruit trees marching up the hillsides.

I had to record my experience of the landscape, and rifled through the Discover and Wild cards to help me remember what it was, precisely, that I needed to capture. The cards that rose to the top were Color, Light and Dark , Pattern , Time of Day and Transport Mode. I created a final pencil drawing, representing the hills of Dufur as I remembered them on three different drives in and out of the town.

The five-minute drawings were a lot of fun, and I was amazed by how much I was able to remember and record, after my walk and even after I had left town. If I had attempted to draw the Dufur from memory in an unstructured way, I would have been overwhelmed. But using the cards to focus on just one theme at a time, made it easy to remember and record my essential experiences.

When the rain comes down, what can you draw from memory? 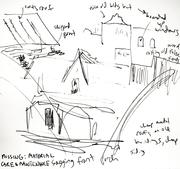 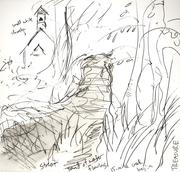 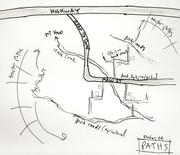 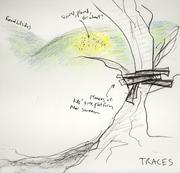 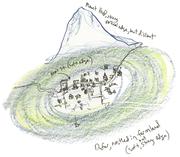 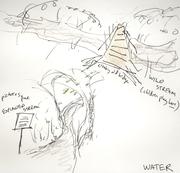 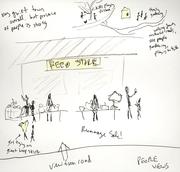 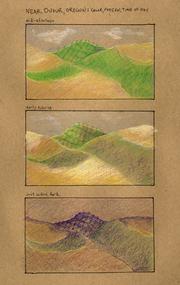